Online Consultation Before and After

What is Nasal Septum Correction?

Even if your nose may appear to look straight from outside, if the symptoms such as rhinitis, sinusitis and nasal congestion is present, there is a chance of septum deviation. Therefore precise and thorough tests must be conducted.

Before
surgery The area of septum where deviation occurred is diagnosed through
advanced 3D CT and nose endoscope,
and the ENT specialist analyzes the nasal septum carefully
to determine the overall surgical plan.

Surgery GNG minimum excision surgery
Minimum incision is made in the part
of septum where deviation occurred and is removed.

As nasal septum is structurally acting as a nose pillar, the risk of side effects increases if standard surgery method is applied in which a lot more septum is removed.

Point 2 How to prevent from the risk of recurrence

There is a possibility of the recurrence of the curved nasal septum because of its tendency to regression.

If necessary, Implant will be transplanted to be firmly fixed

Therefore, the possibility of the recurrence is markedly low.

If the nasal valve is narrowed, it is difficult to improve nasal obstruction by simply removing septal cartilage. The nasal valve, which acts as the roof of the nose, must also be corrected to ensure a broad and clear air passage. Such surgery is difficult for non ENT specialists. Therefore, patients must be careful in choosing the right hospital.

Point 4 Get nasal dysfunctional surgery+ rhinoplasty done at once!

At GNG, we can carry out both functional and aesthetic rhinoplasty procedures simultaneously. Especially after Nasal Septum Correction surgery, a certain amount of septal cartilage is obtained thus being the ideal material to use for nose tip projection. Conducting a fuctional and aesthetic rhinoplasty concurrently is considered a complex surgery. Therefore, it is important to receive the operation by an experienced specialist to maximize results and satisfaction.

The surgery would take about 15~25 minutes, and you can also be discharged on the same day of surgery.

Q2The high cost needed for surgery is too much pressure.

Depending on the type of insurance you have, 80-90% can be covered.

Q3How much pain is expected after surgery?

You may feel uncomfortable after surgery, however in about a week you will be completely recovered and will be able to breathe through your nose.

term ‘plastic surgery’ is perceived as a procedure only for aesthetic purposes in Korea. However, the true meaning of the term ‘rhinoplasty’ itself, is a procedure that allows changes in the shape of the nose. With that being said, it can be conducted with the intent and aim for beauty, but also a way to solve nasal dysfunctions. As an ENT specialist, one of the most frequently asked question I get is “why is rhinoplasty being practice in otorhinolaryngology?” I assume that the reason why this question arises quite often is that because in our society, most believe plastic surgery must only be carried out in plastic surgery clinic.

However, functional rhinoplasty is a unique area of surgery in otolaryngology that cannot be mimicked by a general plastic surgeon, as it involves making the nasal congestion clear by correcting the inner structure of nose. It also goes without saying that the doctor must have a lot of experience in rhinoplasty to yield satisfying results.

When conducting nasal dysfunctional surgeries such as deviated septum, rhinitis, sinusitis, nasal valve obstruction and others that involve inner nasal structure correction, it may be necessary to correct outer structure of nose at the same time. At GNG Hospital, we call this functional rhinoplasty as we change inner and outer structure of nose to solve nasal congestion. During the procedure, we perform procedures for humped, crooked nose as well as standard rhinoplasty procedures to change the shape of nose according to individual’s choice.

On the other hand, in general otorhinolaryngology, most nasal obstruction cases are handled simply by performing septoplasty and sinus surgery. If narrow nasal valve is the root cause, functional surgeries alone wouldn’t correct nasal congestion.
Therefore, we are constantly trying to correct unreasonably spread misunderstandings and misinformation about nose congestion surgery so that patients can make better choices and have the option for safe operation. 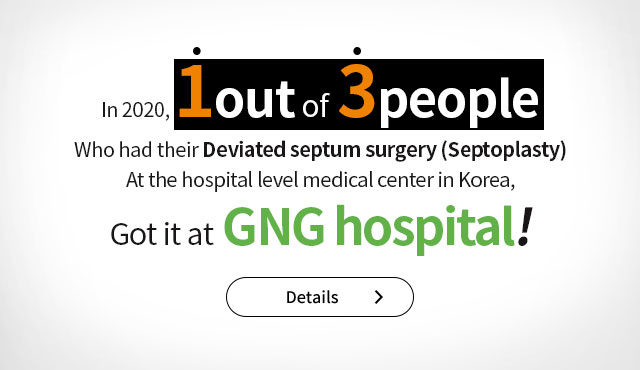 Where should I get a functional + aesthetic rhinoplasty done?

GNG Hospital is the solution to
functional and aesthetic rhinoplasty!

Functional and aesthetic rhinoplasty surgeries do not simply get resolved by joint surgery as each of these is considered an advanced surgery.

GNG Hospital possesses advanced techniques in
both areas of rhinoplasty

Advanced techniques in all areas of rhinoplasty is required
to bring satisfactory results to the internal and external structure of the nose.

GNG Hospital has vast experience in both surgeries

We have experience and prognosis based on vast clinical demonstration
in both in functional and aesthetic rhinoplasty.